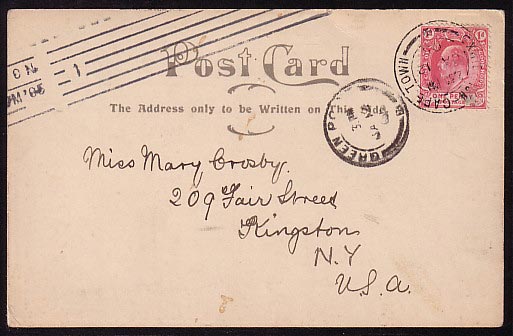 The Cape Town national and international industrial exhibition took place in Cape Town from 20 November 1904 to 28 February 1905. The Cape Town Exhibition was located on Green Point Common. It was officially opened on 26 November 1905. A temporary post office and a commemorative datestamp was provided.

This commermorative datestamp was the second to be used in the Cape of Good Hope, the previous one being that issued for the Kimberley Exhibition.

The Cape Town Exhibition postamark is a double circle with diameters of 22.5 and 16 mm. ‘Exhibition- Cape Town’ appears at the top and a Maltese cross, flanked by two semi-circular bars, is at the bottom of the postmark. A time control and the day, month and year are centrally positioned.
Goldblatt reports that only a single example of this Cape of Good Hope postmark has been seen on cover and one on piece. From our own research it appears that about three items exist with this marking.