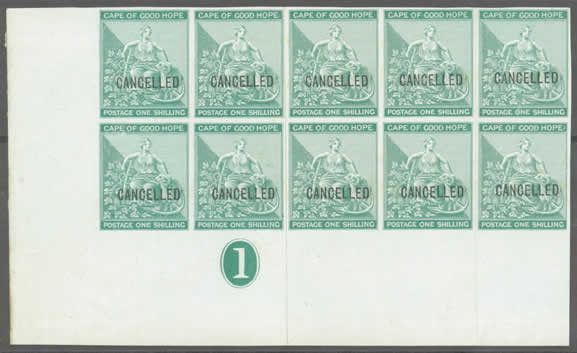 The first rectangular stamps of the Cape of Good Hope were issued in four denominations. The, one pence red, four pence blue, six pence violet and the one Shilling green. These were issued over a period of time as the stocks of the triangular stamps were being depleted. The new design had a ‘Seated Hope’ surrounded by a frame. Note on the illustrations here the outer frame. In later issues of the same design this frame was removed. This outer frame is the distinguish characteristic of this issue.

The first of the rectangular stamps of the Cape of Good Hope to make it’s appearance was the One Shilling green. This was placed on sale in the early part of January 1864.

This stamp should not have been issued until about a year later. Its early issue was caused by a change of postal rates, is to be found in the fact of the new mail contract entered into between the British Government and the Union Steam Ship Company, early in 1863, for a monthly mail service to the Cape of Good Hope, under subsidy, towards which a share was contributed by the Cape Government.

It is unnecessary to enter into the details of these new arrangements, which, were of a reciprocal nature, and which resulted as from the 1st April, 1863, in an increased rate of postage being charged upon half-ounce letters between England and the Cape and vice versa, from 6d. to one shilling, if carried by the mail steamers, and a reduction to 4d the half ounce by private ships for the same service.

This, however, whilst interesting, is somewhat irrelevant to the present purpose, which is to show the reason for the largely increased consumption of the one shilling stamps at the Cape of Good Hope about this period, and which was caused through the altered rate of charge.

The effect was that the Treasury stock of triangular One Shilling stamps ran out at the end of 1863, and the first supply of the stamps of that denomination from the new die prepared by Messrs. De La Rue & Co. which had been received in the Colony during the previous June, were called into requisition.

Small stocks of the One Shilling triangular stamps were, however, still on hand at various country post offices, and for some little time both shapes were in concurrent use.

A considerable number of different printings of the One Shilling stamps were made between 1863 and 1879, all upon the paper watermarked Crown C-C, and they can be graduated in a range of shades from pale yellow-green to the rare deep blue-green. As, however green was the official colour description throughout, it is impossible to allocate any particular shade, however distinctive, to any particular period from the records.

Of this quantity approximately 410,000 were supplied to the Griqualand West Administration for postal purposes in that territory, and were overprinted with the capital letter “ G ” in various types.

(Issued prior to 21st March, 1864)
This was the second stamp to be issued in this series. The first supply was forwarded to the Cape on the 5th May 1863, with the first consignment of the One Shilling value.

As in the case of the One Shilling stamps a good many separate printing were made of the Six Pence upon the crown CC paper and are found in a range of colour tones ranging from lilacs to mauves.

The One Penny Value

(Issued May 1865)
The first order of these stamps was despatched to the Cape of Good Hope on the 19th November 1864. A request was made to have the order expedited as soon as possible as it was anticipated that they would be largely used for the requirements of the new Stamp Act passed at the previous session of the Cape Parliament. This order was shipped in two parcels and was received at the Cape in April and may 1865. It is presumed that they were issued in May 1865 the catalogues normally listing this as 1st of May.

Several printings were made of the One Penny value upon the Crown CC paper between 1865 and 1870 and a splendid range graduating from pale rose-red to rare intense carmine.

Allis records that the Four Pence stamp of the rectangular shape was issued in August 1865.

Between 1865 and 1871 several further printings were made all of which were in lighter shades of blue. In 1871, however, the Postmaster General in requesting further supplies drew attention to the desirability of the stamps of this value being in a deeper shade of blue. He suggested a colour similar, to the colour of the English 2d stamp and stated as the reason for his request, that by gas-light the pale blue assumed a greenish colour and was mistaken for the green of the One Shilling value stamp.

A small number of these stamps were supplied to the Griqualand West Administration where they were overprinted with a “G”.

Colours normally listed in catalogues are as follows:

This stamp is sometimes found with the outer frame-line missing on the side or sides and or top or bottom. This effect was due to the wearing of the plate and resulted in the outer line being discarded when a new plate became necessary.