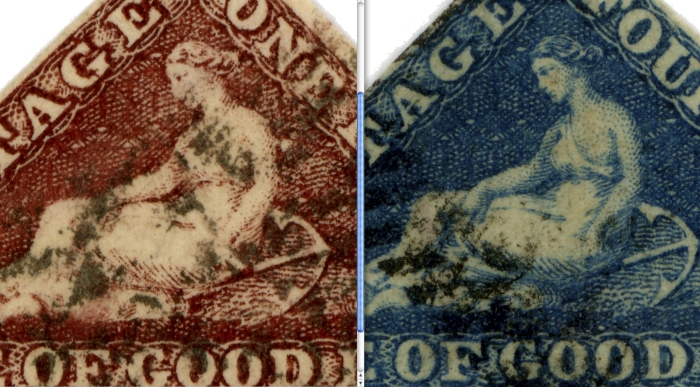 It is recorded in official records that at the end of January 1862 the dies, plates, watermark paper moulds, e.t.c. were handed over to the Crown Agents by Messrs. Perkins Bacon & Co..

These were transferred to the new Contractors-Messrs De La Rue & Co.- in May 1862. This offered an advantage both in cost and in security.

An order was issued to the new Contractor and on the 5th February, 1863, the six Pence and One Shilling stamps were despatched to the Cape of Good Hope authorities. They arrived at Cape Town on the 14th of March while the Four pence was forwarded in May.

In April 1863 another order was placed for the One-Penny and the Four Pence. And despatched to the Colony in December of the same year.

The stamps were printed on watermark Anchor paper.

The stamps can be distinguished from the Perkins Bacon Issues by a printing that is not so distinct -as the plates started to get worn- as well as different printing shades. The stamps are described as having a woolly or flaky appearance. This implies that the engraving lines are blurred and in extreme cases the background is a uniform mass of color. The flaky appearance shows the ink lying in tiny solid areas, as if it had not penetrated a well-chalked paper surface.

You can check this one again below