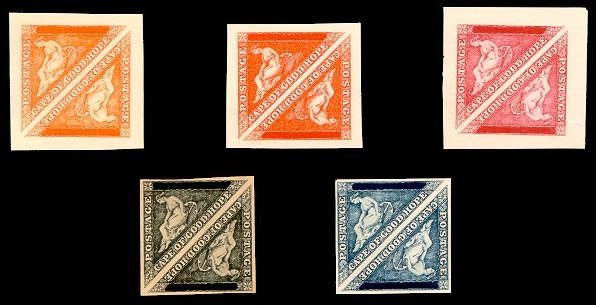 Allis lists thirteen modern die proofs of the 6d and 1s, each in the following colours: black, slate, carmine, blue, brown, red-brown, yellow-green, deep green, yellow, violet, red-violet, orange-brown and bright-rose. It is stated that only six copies were printed in each colour. All early authors ascribe them to the period 1901-1929. All modern 6d die proofs seem to be from the shallow die.

Allis, Meyer and Rich and Stevenson describe modern die proofs with the ‘POSTAGE’ and ‘ONE SHILLING’ erased in one impression and the other impression normal. The colours described are in deep orange for the one shilling and the same in green.

However, similar stamps can be found in black, probably from a later reprinting. (See image below).

Both ‘POSTAGE’ and ‘VALUE” Defaced

The same lists include modern die profs with 6d defaced lightly in both impressions in blue, brown, rose, claret, chestnut and violet green.

The colours for the one shilling stamp being black, green, blue, violet, orange-brown and scarlet.

These various colour prints of the particular defaced 6d. and 1s. stamps are attributed by Stephenson to Perkins Bacon. Apparently these were made as specimens of their work to be shown by their agents to possible clients.

Meyer and Rich refer to the possibility that certain defaced dies may have been re-engraved where necessary by Perkins Bacon and prints made out of them. Reported die prints include two items in dark blue and orange-brown. These are defaced dies of 6d. and 1s. Each item consists of two square pairs set three-quarters of an each apart on the same sheet or card. Stephenson notes that these were possibly made from the dies D4 and D5.

This area of the Cape of Good Hope philately still needs to be researched completely based on material that has come to light over the period since Stephenson wrote his book. Any contributions please email me.

It must be noted that ‘modern die’ proofs of the Cape of Good Hope do fetch some high prices at auction houses.

To be continued in the future!