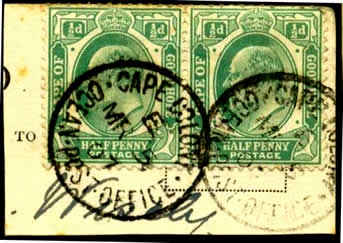 (c) The establishment of Ocean Post Offices on board the Mail Packets is authorised under the following regulations.

Advantage will be taken of the last regulation to establish Post Offices on board the colonial mail steamers so soon as the concurrence of the mail companies has been obtained. The necessary regulations and instructions are in course of being drawn up and the matter will be proceeded with at an early date (1891, p. 36-38).

The diameter of the M 1 Ocean Post Office postmark measures from 22 to 23 mm. The letters are 3 mm high. The earliest recorded date of use is reported by Goldblatt as 18 October 1893 and the latest 3 July 1912. Index letters from A to N are used to denote the Royal mail ships to which individual cancellers were applied.

As was common practice in the Cape of Good Hope the letter ‘I’ was not used in order to avoid confusion with the letter ‘J’. The Union Line, the Castle Line and the Union-Castle Line all used the M 1 postmark. (click the letter to see examples as well as to find out which steamers used it A, B, C, D, E, F, G, J, H, K, L).

M 1 was used right until 1912 and it can been seen right through this period.Its use prior the Boer War is certainly scarcer than during and after the war period. The second Ocean Post office postmark (M 2differs from the first one in that it has a time control – 8 p.m. – instead of an index letter. The diameter is 23 mm, letters are 2.75 mm high and the earliest recorded date noted is 13 September 1904. The last date of usage recorded was the 28 October 1910. The third one the M 3 comes in two variEties. The first one (M3a) is 24 mm in diameter, with letters 4 mm high, but has no index letter or time control. It was in use 3 to 1907.M 3b has a diameter of 25 mm, lettering is 4 mm high, and it shows the letter ‘C’ of which three different sizes and shapes are noted. It was in use from 1902 and the latest recorded date of usage is 28 October 1910.

In January 1904 the datestamp of the R.M.S Armadale Castle was sent to Cape Town for repairs. As it had not been returned by the time the ship sailed, a temporary stamp made on board was used. Impressions of this strike (M4 ), which is dated 23 January 1904 are extremely rare, as it was only used for one voyage. I have not as yet seen a potcard or letter with this postmark.

Varieties of Ocean Post office M 3 Postmark ( M 3 is similar to M 3b but has no control or time letter).