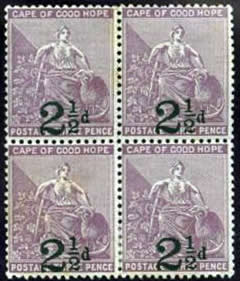 In March 1891 a stamp of a further and final value was added to the list of postal adhesives of the Colony, namely the 2 ½ d. The reason for this addition was the reduction of postage on half-ounce letters to the United Kingdom, as indicated in3a notice which appeared in the Government Gazette of the 3rd December, 1890.

Pending the manufacture of a new plate for the printing of stamps of the new denomination, Messrs. De La Rue & Co. supplied a stock of stamps of the Three Pence “Hope” seated type, printed in magenta and surcharged “2 ½ d ” in black over the word ” three ” in the bottom label of the stamp.

There are two types of the letter ” d ” in the surcharge, one with a straight top, and one with a sloping top. The variety with sloping top is the scarcer of the two, and should, of course, be represented in any Postal History Study of the Cape of Good Hope collection.

In the normal stamp the figure ” 1 ” in the fraction has the serif sloping downwards, but a collectable variety occurs in which the ” 1 ” has the serif with a perfectly straight top, evidently from another type of font. The position on the panes of 60 stamps that is occupied by the variety in question is No. 2 on the second row and No.1 on the ninth row. (See photo above-stamp No.1).

There were two separate printings, and shades of the magenta are obtainable. Care, however, is very necessary here, as many apparent shades are merely faded copies, the magenta colour being very susceptible to this change.

The figure “1” in the fraction has a level top to the serif. With small fraction bar in ” ½ “