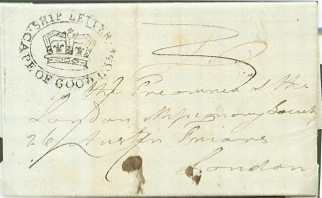 In 1806 England and France were still at war. The Batavian Republic was sympathetic to the French. As the Cape of Good Hope was becoming a major strategic point and its defenses were virtually non-existent the English launched an expedition for its capture.

One of Baird’s first priorities was to restore the system of postal communications that prevailed before annexation and which was in disarray. Pending the introduction of further changes he gave notice in the Government Gazette of February 1806 with effect to the folowing:Approval of the continued functioning of the system of post boers under the control of the landdrosts and the supervision of the field-cornets. The landdrosts of the various country districts,the field-cornets and anyone else who might be concerned with postal matters from time to time, were to see that his instruction was carried out. Arrears owing to the post boers were to be paid to them forthwith by the landdrosts, and these officials were to ensure that the post boers received prompt payment for future services.

The re-opening of the Castle Post Office took place shortly after the proclamation (23 May 1806). Prepayment of letters were made there. The postal clerk in charge was Mr J.J. Berrange and he was assisted by Alexander Watson.

Prepayment of all letters posted from the Cape was compulsory whereas letters posted from the country districts were paid on arrival. To mark these letters as paid a stamp (MLS1) was utilized. This stamp was in fact a governmet seal, and manufactured in England and which was brought to the Cape by the occupying British forces. Examples of this stamp impressed on wax seals exist and it explains the lack of clarity on most of the covers bearing the MLS 1 handstamp.

Pending the arrival of a postmastergeneralfrom England William Caldwell was appointed as deputy postmaster-general on 3 May 1806. He was instructed to revise the postal system, the postal routes to the interior, as well as the means of conveying mails. Caldwell’s recommendations were produced and adopted quickly and regulations published in the Government Gazette on the 24 May 1806.

Appointment of Mathew Gall as Postmaster-general

Mathew hall took over from Calwell who retired on 2 December 1807. He lacked the capabilities of Calwell and hence the postal services suffered accordingly. The delivery of mails between Cape Town and the districts left much to be desired. Whole packets of mail were either lost or delayed on the road for months and delivery was haphazard and unpredictable.

A number of complaints were received and Caledon the newly appointed governor who replaced Baird appointed a Liuetenat-colonel Collins to undertake an investigation.

The MLS-1 handstamp was used for stamping of internal correspondence. As the post-office in the Castle was accepting letters both for inland as well as overseas destinations a new letterstamp was introduced. This was the Ship Letter handstamp (SL 1).

Cape of Good Hope ship-letter handstampOvalmedallion and ship letter strikes are not found together.

Letters coming into the Cape of Good Hope struck with British Ship Letter marks as well as other postal markings can be found with MLS1 as well as SL1. These covers are scarce.

To remedy the situation the Earl of Caledon issued new regulations in the same year in which the duties of postholders and their remuneration were outlined. The efficiencies of the postal services improved and the postal revenue was considerably increased. The introduction of a new postal route from Cape Town to Graaf-Reinet was a major improvement in postal communications. It was brought into operation on 1 April 1810.

No official post offices were established in the country districts before 1816. The residence of every district’s laddrost served the purpose. The landdrost effectively undertaking the duty of post-master. The introduction of the country post offices also saw the use of the crown-circle postmarks and this matter is dealt further in the pages tha