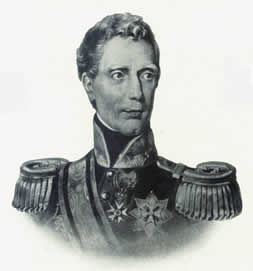 Jacob de Mist was appointed as commissioner-generaland Jan Wilem Janssens as governor and ‘general-en-chef’. This effecively made Janssens the head of the government of the Cape of Good Hope as well as the chief military commander. Janssens and De Mist took steps to initiate the first stages of the Cape’s internal postal system.

Letters sent to overseas during this time bear no postal markings. The postal rates to Europe and elsewhere established under Macartney were retained.

On assuming office Janssens was petitioned by the colonists of the frontier areas to make a personal inspection of the conditions under which they were living. On 3 April 1803, little more than a monh after his installation as governor, Janssens set out fro Cape Town to visit Graaf-Reinet via Fort Frederick (Algoa Bay).He travelled further than he originlly intended and arrived at the Orange River on 18 July 1803.

Janssens was accompanied by a large entourage which included Captain W.B.E. Paravicini di Capelli. One of the benefits of the journey it was that it gav Janssens an insight into the possibility of improving the eastern route communications.

Captain Paravicini noted the state of the roads and the possible routes to be taken by post wagons, as well as possible ports for the collection and delivery of mails.

The post was still contacted by the field-cornets. The changes introduced by Janssens was the first intimation of the public’s right to have its letters carried to and from various districts along an established route. Previously the field-cornet’s post was for the carriage of Government Gazaettes, official correspondence and despatches,while the letters of private persons were conveyed purely ‘by favour’. This postal service became operational on 13 June 1803.

The Dragoon Postal Service was established on 24 June 1803 to provide an inland link between Simonstown, False Bay and the Castle at Cape Town. It operated mainly during the Winter months. Due to the stormy conditions that prevailed in the Cape of Good Hope in Winter the Dutch East India Company has directed its vessels to use the safer anchorage provided by False Bay at this time of the year, which naturally necessitated communication. The postal service served the needs not only of shipping but also of a number of businnesmen who moved their residence to Simon’s Bay during the winter.

The ‘dragonders’ (dragoons) departed from Cap Town daily at 9 a.m., taking with them the letters that have been handed over for delivery to the False Bay area.

Dragoons travlling in the opposite direction left the False Bay area with letters handed in at the residence of ‘wykmeester’ (borough master) Henry Roselt, for delivery at Cape Town. The charge for transmission was a skilling per single letter sheet.

The Cape Town Stellenbosch Post came into operation on 2 November 1803. By order of the ‘Raad de Gemeente’ (Community Council, a body of citizens functioning as the forunner of what we call to-day municipalities). The Hottentot runners were replaced by a post wagon for the conveyance of letters, parcels and passengers between Cape Town and Stellenbosch.

Letters could be posted at the drosdy at Stellenbosch, and it was the duty of the landdrost to see that any letters for other districts were correctly sorted into different mail bags. The post wagon left Stellenbosch each Wednesday at 5 a.m. in summer and 7 a.m in winter. It was drawn by a ‘span’ (team) of up to 20 oxen,as it had to cross the Cape Flats, where the draught animals often sank knee deep into the sand. The journey of 18 miles (29 km) from Stellenbosch to Kuils River was accomplished in only three hours, but the last 12 miles across the Flats to salt River, near Cape Town, took an additional 5 hours.

The postwagon was also used to convey parcels. Items that were addressed to destinations further afield, the recepient had to pay the additional post from Stellenbosch onwards. The Stellenbosch postmaster woud sort the mail for other districts into their respective mailbags, which would then be carried by Hottentot runners to the next drosdy, where the process was repeated.