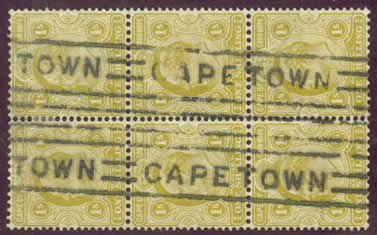 During 1882, facilities for the transmission of parcels developed rapidly and a number of datestamps were introduced (Goldblatt P1 to P4). Smaller post offices employed the datestamps used for stamps.

On 1st July 1888, the inland parcel post service was extended to all the colonies and states of South Africa and by 1890, parcels could be posted to virtually any part of the world. As the volume of the parcel post grew, so did the need for the introduction of new defacing implements. The first of these was a hand-operated roller (PRO 1) followed by similar deigns as shown in PRO 2 and PRO 3.

Another common way was for the postmasters to make their own cork cancellations for use on parcels. (see Cork Cancellations of the Cape of Good Hope).

At the beginning of the parcel post no receipts were issued for parcels. Receipts were only introduced in 1890. The sender was able to obtain proof of having posted a parcel on payment of a fee of 1d., but this receipt or certificate, as it was termed, was intended purely for information-no liability accrued to the post office in respect of any parcel dispatched. The receipt was valid only if franked with a 1d postage stamp, defaced by the post office from which the parcel has been sent. This requirement continued until the Union was formed.