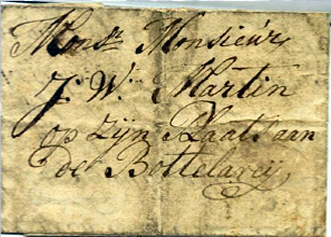 Early local correspondence in the Cape of Good Hope was transmitted using letter runners. These were usually Hottentot servants. They wore only a loincloth and could therefore not carry letters on their person. A cleft stick, the so-called briefstock was used for this purpose. The briefstock varied from one to two metres in length and the top was split down the centre to a depth of about 200 mm. The bottom end of the split was bound with a riempie (rawhide thong) preventing further splitting when letters were inserted. To hold the letters the top part was again tightly bound with another riempie.

These early Postal History items of the Cape of Good Hope can be identified by the indentation or crease mark in the middle, made by the edge of the stick.

These Hottentot servants had an amazing stamina. They have been reported that they could easily cover 80 to 90 km per day at a steady jog-trot, holding the stick in front of them. The stick served a dual purpose, for not only it prevented the runners from handling the letters, but it also protected the letters from getting wet when the runners were crossing streams. This method of carrying letters was not confined to the Cape of Good Hope but was also reported elsewhere in southern Africa and as far as Japan.

This method of carrying briefstock letters was reported in Matabeleland as late as 1887. It has been noted that Sir Sidney Shippard, the Administrator of British Bechuanaland, while on his journey to the Matabele chief Lobengula, is known to have dispatched a letter by runner to the Assistant Commissioner, Mr. Moffat at Gubuluwayo.

A limited number of these briefstock covers exist. You should be very careful if you buying any of these items as a number of forgeries exist. If you purchase one try and obtain a certificate and try and ascertain it’s provenance if possible.