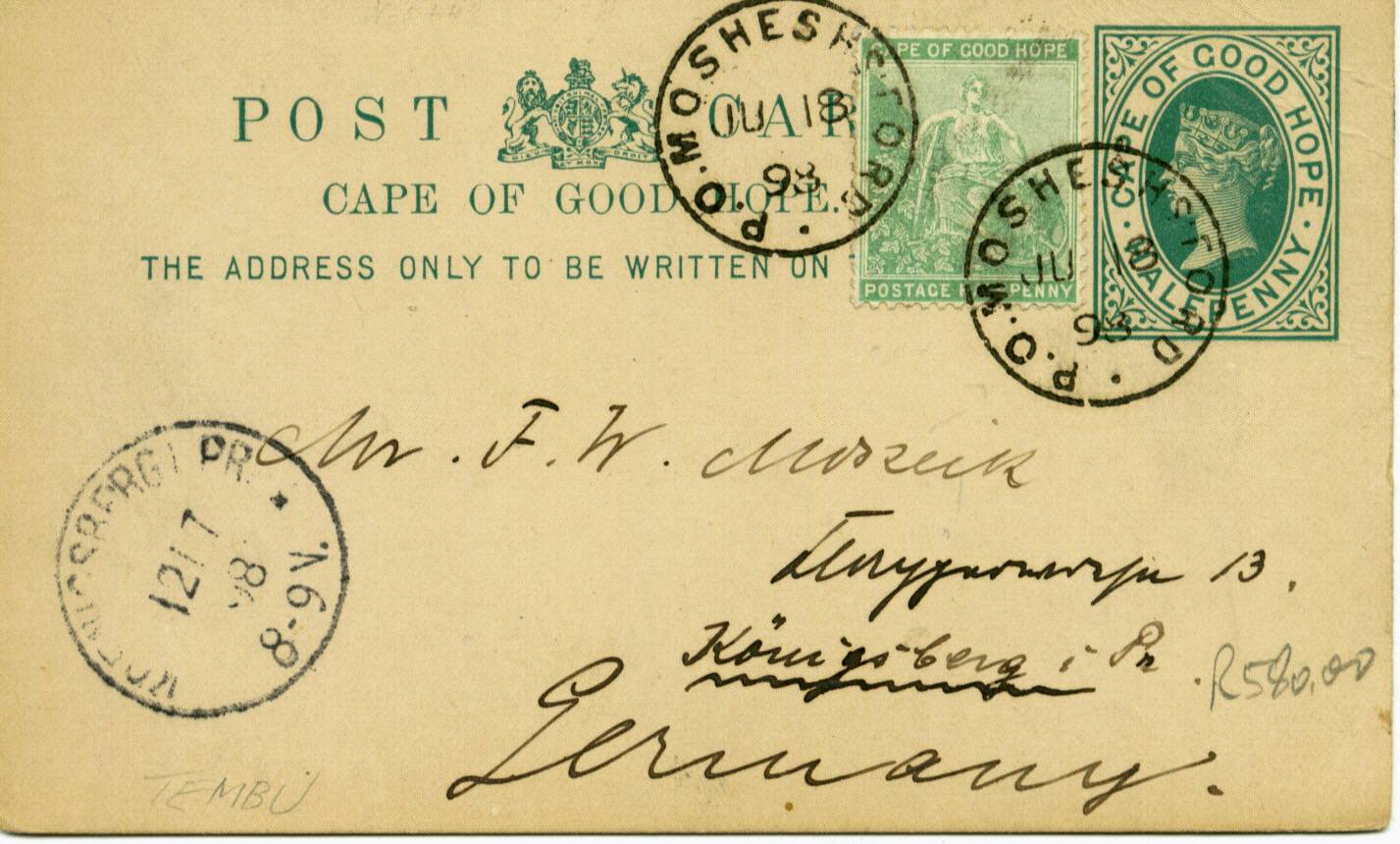 The first circular datestamps of the Cape of Good Hope were issued in 1864. At first these were only issued to the general Post Office at Cape Town and the Port Elizabeth post office. Over a period of fifty years new and varied designs were issued. This section examines all the designs and variants both for the single circle as well as the double circle cancellations.

This section does does not deal with the more specialised cancellations used in the ancillary services such as parcel post, T.P.O., ocean post and others which rather belong to different sections of this collection. It exclusively deals with circular markings used for dating and cancelling ordinary correspondence. The coverage of the earlier marks of this exhibit is mostly based on the James Perkins correspondence where material was adequate in my collection to form a coherent study with very little gaps. Now and then I have used colour prints of back of postcards and letters. This was intended to give the reader a flavour of the times when these postmarks were used.

The postmarks are firstly classified broadly into single or double circle and then divided into various types.

The first circular datestamps of the Cape of Good Hope were issued in 1864. At first these were only issued to the general Post Office at Cape Town and the Port Elizabeth post office.

This postmark was used both for the stamping of inland mail as well as overseas mail. The design is a circle of between 22 and 23 mm. The name of the town appears at the top, with ‘Cape Colony’ at the bottom. For the first time a time control letter appears in the postmark.

Apart from the differences in the diameter of the circle, other varieties – all relating to CDS 1 are known.

Cape triangular stamps defaced with this postmark at Cape Town and Port Elizabeth between january 1864 and 1865 are known. They can be found with this postamark either in black or red ink. The red,if genuine is rare. Care should be taken in acquiring items with this postamrk in other colours. After march 1865, this postmark was officially sanctioned to be used both for the back-stamping of letters as well as for defacing adhesives and consequently after 1865 their raririty is diminished.

A similar postmark to CDS 1 but approaching more the Second Circular Postmark was recorded in 1900.

This has a dot between ‘Cape’ and ‘Town’ but the ‘CAPE COLONY’ is absent. It has the time instead of a time control letter as shown for CDS 3. considerably.

Shortly after the General Post Office at Cape Town and the Port Elizabeth post office began using CDS 1 and 2, a supply of datestamps was received from England. However, due to a misunderstanding, however, the wrong type had been sent.

These datestamps were not in accordance with the selected design, as the words “Cape Colony” in the lower section were omitted.

Because they were urgently required, the stamps were accepted by the authorities and distributed to the various post offices for which they had been ordered, instead of being returned to the manufacturers.

The design of the second Circular Dated Stamp of 1864 (CDS 3) was similar to one used in Great Britain at about the same time. The diameter is 20 mm and the name of the town appears at the top. The time control index letter and the day, month and year, in three lines, are located in the circle.

In 1865, when the correct datestamps arrived and were distributed, some post offices used both simultaneously, with and without the words “Cape Colony”. Impressions of this strike in green and violet should be avoided.

These Circular dated stamps of the Cape of Good Hope Goldblatt Types (CDS 4 to 15) are all very similar in design. They show the month, day and year of use in two lines and usually an index letter. The name of the town is top, immediately within the circle, but exceptions are CDS 11 and 12, where the name of the town is split and CDS 13, where a street address appears above, with ‘Cape Town’ below.

These circular datestamps of the Cape of Good Hope were not intended as defacers. They were normally used for dispatching as well as receiving marks.

The distinctive feature of this datestamp (Goldblatt Type CDS 16 to 20) is the dot at the bottom, approximately 2 mm above the lower curve of the circle. It was put into use in the Cape of Good Hope in 1885 and was widely distributed to most post offices in the colony.

The name of the town appears above and follows the curve of the circle. The month, day and year are in the centre. There is usually a control letter, although in some of them it is absent.

There are some interesting varieties of this Circular Dated Stamp of 1885. CDS 17 shows the letters P.O. (post Office) before the name. This was used in Upington with a large dot at the base. Steynsburg and Baviaans Drift used a similar one, but the dot is of normal size. The half-penny postcard illustrated above shows the same CDS for P.O. Mosheshsford. The second type shows both the name of the town and its territorial division as with ‘Concordia Namaqualand’.

The ‘Walfish Bay’ strike (CDS 20) shows a dash at the bottom instead of a dot. Cape datestamps from Walvis Bay are usually found cancelling Cape of Good Hope adhesives of the King Edward VII issue.

In 1891 a circular datestamp with the letters C.G.H. – an abbreviation of ‘Cape of Good Hope’- was introduced and widely distributed. This datestamp survived many years into Union and was in use in some of the smaller offices, for example Paternoster as late as 1935.

Various circles, differing in diameter and lettering, were brought into use from time to time. The datestamp distributed in 1896 manifests two other characteristics, which assist classification: the presence or absence of dots before and after the name of the town and whether or not the letters are normal or wedge-shaped.

A single circular datestamp similar in design to those issued in 1869, was introduced from about 1902 onwards (Goldblatt Type CDS 31). It received very limited distribution. It has a diameter of 28 mm, with lettering measuring only 2.5 mm high.

During 1903 Single Dated Stamps were again put into use. These are found in various designs as shown below with diameters of either 23 mm or 26 mm.

Some of these postmarks can be found used well into the union period.

The Numeral at Bottom Stamp of the Cape of Good Hope