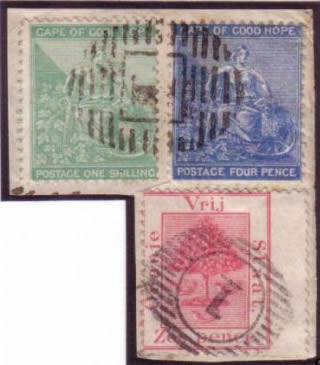 Stamps of the Cape of Good Hope on covers or pieces can occassionaly be found. These are normally from the first rectangular issue with the outer line. The majority of them being the four pence blue.

Allis states that from documents in the Cape Archives it appears that for sometime before the introduction of stamps in the Orange Free State a form of mail carrying contract existed between the Cape and the Free State, whereby an annual payment was due by the Cape Government. Apparently this was done in the form of stamps.

The fact that they were the actual equivalent of their face value in cash would indicate that the Free State Government must have recovered their value by disposing them to the public for use on mail matter from the Free State teritory passing to or through the Cape Colony. They can actually be considered as provisionals, for their use was officially accepted although their exact rank is obscure.

Allis also states that items of this kind in question are of considerable rarity.