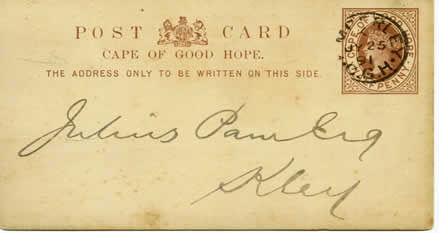 The South African and International Exhibition in Kimberley, 1892

The South African and Internatonal Exhibition was staged in Kimberley in 1892. It was opened by Sir Henry Loch, the then Governor of the Cape of Good Hope on the 8th of September. It presented exhibits of art, an exhibition of paintings from the royal collection of Queen Victoria and mining machinery and implements amongst other items. The exhibition aroused considerable interest at internationallevel, which resulted in a competition for display space.

The government of the Cape of Good Hope allowed the secretary of the exhibition free franking privileges, before the opening of the event. Three exhibition cachets are known (E 1,E 2 and E 3).

The earliest exhibition covers E1 has a double circle design and has a diameter of 53 mm. It reads “South African and International Exhibition, Kimberley, 1892”. There is a star at the bottom and the date is located centrally.

The second in the series (E 2) also has a doubled lined circle design. The diameter is 40 mm.The wording is the same as E 1, but there is no star. It has the signatue of Mr. Robinson the secretary to the exhibition.

E 3 is a tremble-lined oval surmounted by a crest of the arms of the Cape of Good Hope. The endorsement of J. Al Ellis, secretary of the Cape Town committee of the exhibition. The only known cover is dated 19.7.1892. This cover which is illustrated above had a letter enclosed canvassing contributions from the Cape of Good Hope socialites.

Another postmark E 4, indicates that a temporary post office was opened at the exhibition, and that the Cape of Good Hope authorities provided a special date stamp for the occassion. (The exhibition brochure mentions that the postal facilities would be available to exhibitors and visitors).

However, a poscard in my possesion though shows correspondence emanating from the exhibition franked with the single circle Cape Town mark does not show such a mark. This post card is illustrated below.

Postcard Posted from the Exhibition