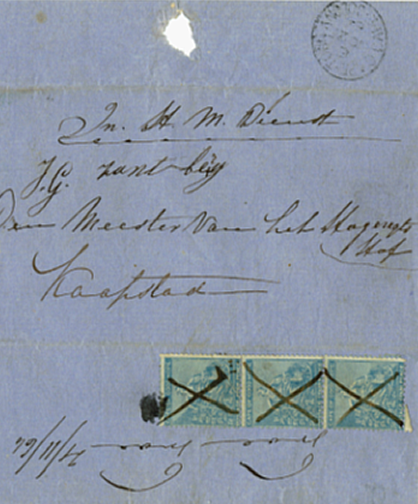 A number of the early Cape of Good Hope stamps were legitimately cancelled by pen on post office instructions as no cancellers were provided. These ‘pen cancellations’ or defacement of stamps was intended by the postal authorites to prevent their re-use and form an interesting branch of Cape of Good Hope Postal History. Care should be taken not to confuse these pen cancelled stamps with those pen cancellations for fiscal purposes.

These post offices were in the majority agencies generally operated by storekeepers, farmer’s wives or missions and were often remote – especially in the Karoo areas where the quantity of mail was limited. The functions of postal agents were to receive letters for onward transmission, or hand letters to addressees. They also sold postage stamps, which they could purchase at a small discount, but many postal agencies were not provided with a cancelling device.

Thus, when an agent was handed a letter bearing an unused adhesive, he would occassionally apply a pen cancellation, sometimes inscribing the name of the postal agency on the stamp for this purpose. These covers are not common.

The pen cancellation of revenue stamps has always been acceptable and this defacement for fiscal use is still practiced to-day. The defacement of stamps for fiscal purposes was also carried out by means of handstamps. This was carried out according to the Stamp Act of 1864. Most bank handstamps incorporate the word bank. These are described in detail in Goldblatt. These sometimes are difficult to recognise and the collector should be careful in buying pen cancelled stamps. These should preferably be bought either with a certificate or on cover.