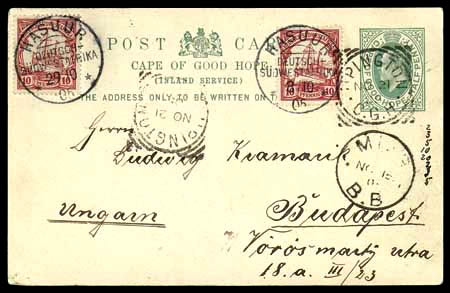 Mierland (which translates literally from the Afrikaans as Antland) is partly Kalahari sanveld and partly low gravelly hillocks, interspersed with waterless pans. Geographically this is now part of Botswana and is bound to the west by Namibia (South West Africa) and to the east by the Molopo river. The nearest twon is Upington in the northern Cape.

The post office in Upington was opened in 1882. The so-called Trader’s route throught the Kalahari led to Zwartmodder some 95 km away. In September 1895 a postal agency was opened at Ritefontein, north of Zwartmodder, about 3 km from the border of what was then the German South West Africa.

A small village approximately 30 km from Rietfontein actually bears the name Mier. However, Rietfontein was referred to as Mier and letters received at Rietfontein were struck with a Mier handstamp (MR 2). In the village of Mier there were no postal facilities.

When the Upington postoffice was opened in 1895 mail was conveyed weekly on horseback from Upington to Zwartmodder and carried from there to Mier by a runner every fortnight. He ususally made the journey of some 160 km in five days, and the return journey also took five days.

In 1898 this was changed to an oxcart but due to the difficulties the animals had in tranversing the Kalahari the Cape of Good Hope post office decided to change this to camels.

During the great rindepest epidemic of 1895-6 camels were brought into the Cape of Good Hope for inoculation experiments and the post office obtained the camels from Uitvlught a government forest station near Cape Town in June 1899. These camels and their handlers were stationed near Zwartmodder. The conveyance of these posts in what became known as the ‘Mier Camel Post’ started in July 1899. Two camels were used in each tripfor safety. One being ridden and the other carrying the posts. They carried the mail to Rietfontein about 200 km away in special saddle pouches.

These mode of transporting the posts became a great succes and the camels completed the journey much quicker thn the ox-cart contract. The camels feeding on the sparse grass and scab on the way. the total annual cost of the service was reported to be £ 408.

During the Anglo-Boer war the service was suspended from9 March to 18 May 1900, to prevent the animals to be captured by raiding Boer Commandos who were very active at the time in the Northern Cape. (The camels were taken across the border to German South West Africa).

During the Nama Rebellion (Herero War of 1904), the Bondelzwart campaign and other related military activities in German South West Africa, there was a considerable increase in the mail conveyed between Mier and Zwartmodder. The increase in letters and parcelpostor condition of the camels during a prolonged drought led to the Commissioner of the Police assisting the post office by allowing mails to be carried by the camels used for police patrols.

In 1906 the use of camels was temporarily halted to allow the camels to regain their strengths. The camel post was resumed again in May 1907, but the ox-cart was again used from October 1907 as two of the camels were incapacitated. The post was resumed on 1 February 1909 and continued uninterrupted until 31 March 1914, when it was permanently abandoned due to an inability to replace the camels. The remaining animals being sold to the Department of Defence and the ox-cart being put into service again.

The service used exclusively Cape of Good Hope stamps and postal stationery were used at Mier. Two handstamps were used (MR 1 and MR 2). MR 1 was a Barred Oval Numeral canceller (BONC) with the numeral 938. MR 2 was a single circle 25 mm in diameter and with the words MIER in the top and B.B (British Bechuanaland) at the bottom.

The Mier Post touches the history of three territories, Cape of Good Hope, South West Africa and British Bechuanaland and postal history items can be found in collections of all three countries.