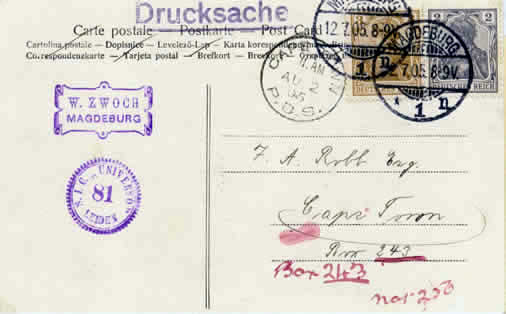 The first intimation of a proposed introduction of private post office boxes at the Cape of Good Hope was contained in a report dated 2 May 1853 by the Post Office Enquiry Board.

The Board recommended the provision of ‘Particular Post Boxes’ for merchants, having noted the delay which took place in the delivery of letters to merchants, and in the confusion which arose by giving change to their clerks or servants in the hurry of delivery’.

The proposal was accepted and a notice was publishd two days later, enabling the establishment of this service in the Cape of Good Hope.

It is reported that by 23 January 1854, 55 merchants have rented private boxes at a rental of one pound per year. A rate that remained unchanged for more than 50 years! (See Post Office Receipt).

The earliest special stamp recorded for cancelling mail placd in private boxes (PB 1) appears to date from 1900. It consisted of a circle, 23 mm in diameter, with Cape Town at the top,the day, month and year in three lines in the middle, and with letters P.B.S. for Private Box Section at the bottom of the circle.

A rubber datestamp, a tremble-lined oval (PB 2) was brought into use about 1903. It measures 37.5 by 25 mm and the day, month and year are centred. The words ‘Private Box Section’ appear in the uper portion of the oval, with the words ‘cape Town’ below. Above and below the date ornamentation consits of four dots and two dashes with a star at each side of the oval.

Handstamps with the words ‘Unclaimed at Private Boxes’ (PB 3 and 4) were issued by the private box section. These are found impressed in red, violet or black ink on all letters that the owners failed to claim. unclaimed letters were either handed to the Dead letter Office or the Returned Letter Office. PB 3 can be dated to 1905.