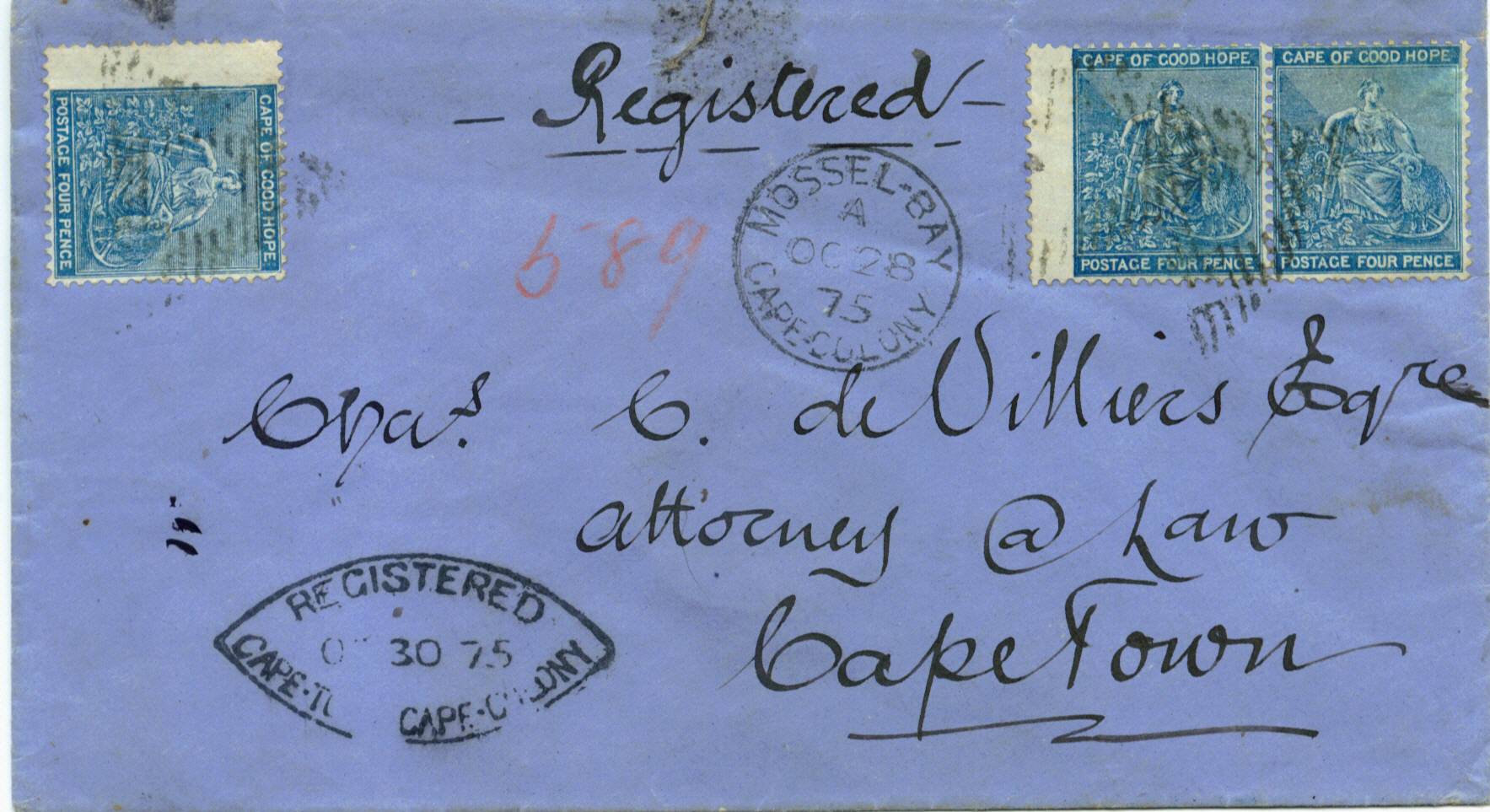 Registration of letters appeared early in the Postal History of the Cape of Good Hope. Rhenius proclamation of the 2nd March 1792 provided for the establishment of a postal system at the Cape of Good Hope. This early postal system required that the Postmaster on payment of a fee of four stuivers, would record details of any letter or packet in a special book kept at the post office and would also make an annotation and append his signature above or below the seal which secured the letter or packet. No liability accrued to the post office, however in the event of a loss.

Establishment Of Registration Section in the Cape of Good Hope

With the spreading of post offices around the country a Registered Letter section was established at Cape Town’s General Post Office to deal with this class of mail. By January 1854 the term ‘Registered’ was firmly established.

Registered Datestamps and handstamps in the Cape of Good Hope

The first registered Letter datestamp (RL1) was brought into use in the Cape of Good Hope shortly after 1854. It was, however, still necessary to write “Registered” on the cover until about 1863-64, when a handstamp (RL2) replaced the manuscript marking.

The numbering of such letters was essential and the postmaster initially wrote the number on the envelope, alongside his office datestamp. Special registration handstamps (RL3 to 5) were introduced from 1909 onwards to facilitate the numbering.

A large variety of both circular and oval Registered Letter datestamps (RL 6 to 20) were in use. The horizontal oval handstamps (RL9 to RL18) were in most general use in colonial post offices for canceling adhesives whereas the circular ones were mostly used for back stamping of envelopes.

Printed receipt forms, similar to those in use today, were available to senders a few years later.

The registration fee was originally 6d. This was reduced to 4d in 1869 and to 2 ½ in 1897. Printed receipt forms similar to those in use today were available to senders of registered letters.

On foreign letters sent by packet via the United Kingdom to Austria, Germany, Prussia, Saxony, Denmark, Norway, Sweden, united States and all British possessions: 1s. To Russia and Poland: 1s. 4d. if not exceeding a half ounce and 4d. for each additional half-ounce. To France and countries to which correspondence is forwarded through France: an additional amount equal to the amount of British or foreign postage.

Charge for registering to any part of the colony, neighbouring states or the United Kingdom: 4d per letter, book, sample packet or newspaper.

Compulsory registered letters: Letters containing coin, as well as having the word “Registered” written upon them, posted in the colony without registration, were registered and forwarded charged with a double registration fee.