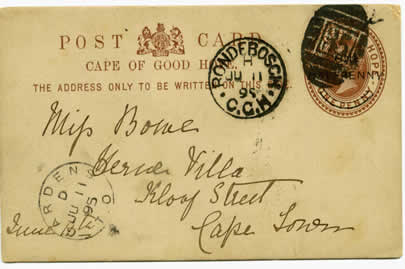 The first telegraph line in southern Africa was inaugurated on 6th May 1860 in the Cape of Good Hope. It operated as a private enterprise, owned by the Cape of Good Hope Telegraph Company. It operated a line between Cape Town and Simonstown. Its first office was a wooden, pagoda-like structure on the comer of Adderley and Strand Streets. For a very good historical account of telegraphs see the Telegraph Office.

A line from East London to King Williamstown was installed in 1861 and further extensions linked Port Elizabeth and Grahamstown. The government subsidized this line. In 1863 telegrams could be accepted for East London, King Williamstown, Port Elizabeth and Grahamstown. Other extensions followed. With the discovery of diamonds, the wooden pagoda of the telegraph office became a vital centre of commercial and financial activity for Cape Town’s business community.

On the 1st July, 1873, the lines of the Company became the property of the Government by purchase for the sum of £41,123, under Act No, 18 of 1872, and from that date were worked by the Telegraph Department. (Until 16 February 1885, however, it remained a separate entity). At the time of the transfer the entire length of telegraph line in the Colony was 760 miles, with 16 Offices.

The first South African Telegraph Union Convention was entered into between the Cape Colony, Natal and the Orange Free State in 1883. This agreement effected the abolition of the system of double inland rates for telegrams exchanged between the countries, parties to the Convention, and brought the tariff for such messages down to the level of the rates in force within the Cape Colony(The expansion of the Telegraph Services are largely attributed to the efforts of the then Postmaster-General the Cape of Good Hope Sir S R French).

In 1892 a Telegraph Service was inaugurated in the Crown Colony of Basutoland under the administration of the Postmaster-General of the Cape Colony; and in the following year the telegraphs of the British South Africa Company were also placed under the management of the Postmaster-General of this Colony, and remained so until the 23rd February, 1897.

1895 Incorporation of British Bechuanaland Telegraphs into Cape of Good Hope

By the annexation of British Bechuanaland to the Cape Colony in November, 1895, the telegraph system in that territory became a part of the general system of the Cape Colony.

In 1899 the telegraph rates within the Cape Colony and to the Transvaal, Natal and the Orange Free State were
again revised, the rate being fixed at 1d. per word with a minimum charge of 1s.

A third telegraphic connection between South Africa and Europe, in the form of a direct deep-sea cable from Porthourno, Cornwall, to Table Bay, via St. Vincent, Ascension and St. Helena, was opened in 1901; and the following year direct communication between South Africa and Australia was established by means of a cable landed at Durban, with which the Western Cable was connected by a special overland line from Cape Town, constructed exclusively for the cable traffic.

As a result mainly of negotiations initiated and carried through by this Department, considerable reductions
have been effected in the rate charged by the Eastern and South African Telegraph Company for cablegrams between South Africa and Europe. From the following table it will be observed that during the last ten years the rate has been reduced 50 per cent., and that, allowing for the extraordinary inflation of the figures covering the period of the war, the number of cablegrams forwarded from Government Telegraphic Offices in the Colony indicate substantial increase in the traffic since 1899.

Post Office Telegraphs of the Cape of Good Hope 1885

Post Office telegraphs were incorporated under the aegis of the postmaster general in 1885. A typical handstamp in use in the 1870s (TO 1) was oval and contained the words “Telegraph Office” and the place name in the upper and lower curves, respectively. The earliest types of dated strikes of the Telegraph Office under government control — but not yet under postal administration — are TO 2 to 6, and those from 1885 onwards, when the office fell under the General Post Office, are TO 7 to 10. (TO 11 and 12).

The country post offices of the Cape of Good Hope also used the telegraph datestamps somewhat indiscriminately for defacing stamps on mail. As a result, they were withdrawn and the normal datestamp used for dating telegrams. Some postmasters used the Barred Oval Numeral Canceller (BONC) for this purpose.

The head office in the General Post Office in Cape Town, however, continued using a special stamp for dating telegrams and adhesives canceled at this office can accordingly be easily identified. Although all the old telegraph forms were destroyed from time to time under the supervision of postal officials in terms of standing instructions, in several instances the stamps were first removed and thus escaped destruction. From about 1905 onwards, the Cape Town head office also used the ordinary datestamps to cancel the stamps on telegrams.

As regulations prohibiting the removal of stamps from telegraph forms were now more rigorously enforced, fewer stamps with telegraphic cancellations are extant. They are seldom seen and are usually on the 6d., Is. and 5s. values of the King Edward VII issue of the Cape of Good Hope. Telegraph offices were also established at railway station post offices and these (RTO 1 and 2) can be identified by the use of the letters R.T.O. for Railway Telegraph Office at the bottom of the postmark. (See Telegraph Office Markings).