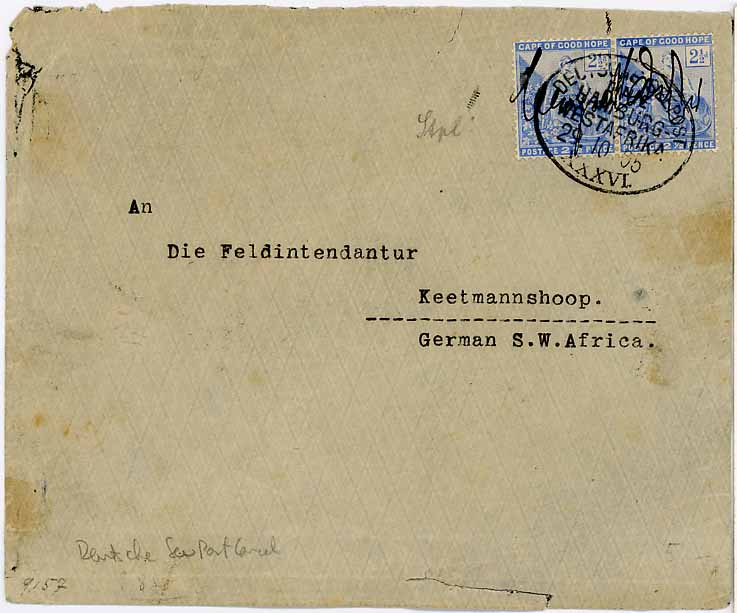 The Paquebot and Foreign Handstamps

Of special note were the provisions that mail posted on board a vessel at sea required to be franked with the postage stamps of the country under whose flag the ship was sailing and at the postal rates current in such a country.

This mail, on transferral to the postal authorities of another country for onward transmission, had to be landed at the first port of call in such a country.

To qualify for exemption from further franking with local stamps, the mail had to be handed to the authorities by an officer or represenative of the ship. He would provide a written or oral declaration that the correspondence orginated on the vessel under the prescribed conditions.

This type of mail received a paquebot (packet boat) handtamp (M 15). The word ‘paquebot’ is enclosed in a rectangular box 7 x 42 mm with lettering 4 mm high.

Cape of Good Hope stamp are found defaced by a dated handstamp (M 16). This was not a handstamp of the Cape of Good Hope post office but a ship’s canceller carried abooard vessels of the Woermann Line for defacing mail posted on board. This line carried mail between Cape Town and German South West Africa.

Cape stamps were sold on German vessels while in the proximity of the Cape and mail posted aborad was cancelled with these postmarks.

So called “consignee mail” is also known.The owners charterers of vessels and the consignee of goods (business houses forwarding the cargo or their shipping agents) were entitled to have their letters carried free of the usual ship letter for ordinary mail. The envelopes were usually inscribed to indicate their right of exemption.