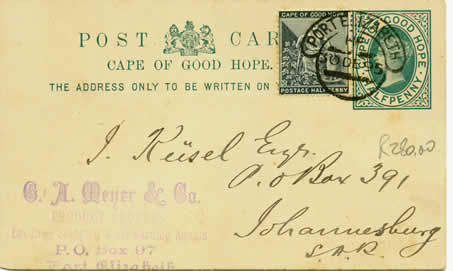 Between the years 1882 and 1900 six handstamp designs were issued on what appears a highly selective basis. Their main characteristic being their unusual design. The purpose of them being issued was to find a datetamp that could be used for simultaneous defacing and dating of letters. The majority of them were only used at the General Post Office in Cape Town. Others had limited distribution. The Squared Circle was the exception having been issued to some 55 different post offices.

These handstamps can be classified as follows:

I found the inclusion of the Divided Inner Circle Datestamp necessary – although authors such as Goldblatt and Jurgens do not classify it as an experimental datestamp – as it has all the characteristics of an unusual design, limited distribution and relatively short life. The exhibit attempts to classify, hereto all the types and varieties as well as to present a chronological map of their usage and distribution and to record earliest and latest used example.

Their use was mostly deducted as a result of this exhibit and is summarised as follows:

The exhibit is mostly based mostly on the James Perkins correspondence where material was adequate in my collection to form a coherent study with very little gaps. Now and then I have used colour prints of back of postcards and letters. This was intended to give the reader a flavour of the times when these postmarks were used.

The design of the square circle postmark was similar to a British counterpart used widely in the colonies. At first the square circle cancellers were issued only to a number of major post offices, but from 1900 it found a general distribution. It appears that some 66 square circle cancellers were issued to some 55 different post offices. Cape Town was using the square circle handstamp from July 1882. This was followed by King William’s Town and Port Elizabeth in 1884 and Queenstown in 1889. It remained in service till long after the Union in 1910 and is recorded in use in Kuruman in 1926, Victoria West in 1924, Knysna in 1913 and Ellis Post as late as 1940. Goldblatt classifies these handstamps in eight categories. Some additional varieties exist and I have modified the numbering to suit. In Cape Town the use of this datestamp stopped in April 1888 when the Squared Octagon datestamp was introduced. The G.P.O. squared circle reappears in the middle nineties again. This exhibit follows the development of these handstamps examines first day of issues and attempts to give an overview of their classification.

The Square octagon datestamp (Goldblatt SO 1 ) was another experimental postmark aimed in finding a canceller that could be used for the simultaneous defacing and dating of letters. It followed the issue of the square circle postmarks. The Square Octagon canceller was issued to the Cape.

Town General Post Office exclusively in 1887. The datestamp resembles those used in the Orange Free State and the South African Republic (Transvaal) at the time.
It appears that the earliest date of use was 1st May 1887 on a cover from Cape Town to Worcester. An example with dark blue ink has also been recorded. It had a very short lifetime and was replaced by the Hooded Circular Datestamp of 1888.

The Compass Wheel Datestamp of 1891

In the course of 1891 an an entirely new type of handtamp was issued. This stamp was only issued to Outdtshoorn and Cape Town.

The design is a scalloped octagon,composed of 32 small segments with a larger pentagon at each of the eight points. The segments encompass a circle of 16 mm, containing the control letter and the day, month and year set out in three lines.

I have found no evididence of use of this datestamp in 1891. The only evidence I could find was from 1892. So unless this stamp was issued to Oudtshoorn earlier than Cape Town, it only came into use in 1892.

The Compass Wheel datestamp of Cape Town (CW 1) differs slightly from that of Outdtshoorn (CW 2). The former adds “Cape Colony” to the town name and the latter has the letters C.G.H. These were the preultimate of the experimental handstamps commissioned as trials for a combined obliterator and datestamp.

The Truncated Double Circle Datestamp of 1890

The Truncated Double Circle datestamp (Goldblatt TDC 1 and TDC 2) was issued to the Cape Town General Post Office in 1890, with a variant to the Graaf-Reinet post office. The design is based on an inner and outer circle, the inner divided by two heavy horizontal bars into three sections – an upper and lower segment, with a central area containing the date.

The Truncated Double Circle datestamp issued to the Cape Town G.P.O. (TDC 1) has a control letter in the upper segment, whereas the lower is blank. The outer circle diameter measures 29 mm and is broken at the bottom. The inner circle measures 18 mm.

TDC 2, in use in Graaf-Reinet, differs from the Cape Town strike in that the letters C.G.H. follow the name of the town and there is no cross at the break of the outer circle. A small star is located in the lower segment of the inner circle.

The Hooded Circular Datestamp of 1888

This datestamp was another experimental postmark issued in an attempt to develop a combined defacer and backstamping canceller. It was issued to the larger post offices in the Cape of Good Hope in 1888. This stamp did not gain general favour and was never issued to smaller post offices.

The Hooded datestamp derives it’s design from similar datestamps of Great Britain. It consists of a circle with a diameter of 19 mm, surmounted by a ‘hooded’ portion which contains the name of the town. The circle is divided into three sections by two horizontal bars. In the middle of the bars is the date and the top and bottom have either a star or a time control letter or none, which results in the different variations of this stamp. Six variations are normally recognised and these are designated HCDS 1 to HCDS 6.

The Divided Inner Circle Datestamp of 1898

The General Post Office in Cape Town began using this new type of datestamp in 1898 for both backstamping of letters as well as defacing of stamps. It appears that The Divided Inner Circle Datestamp was used exclusively at the G.P.O. head office of the Cape of Good Hope.

Contrary to other Postal History studies (Goldblatt and others do not treat it as an experimental handstamp), I have treated this datestamp as the last of the experimental handstamps due to the fact that this followed directly the use of the Compass Wheel. It is also the first datestamp to use the actual time, instead of a control letter. The experimental handstamps were all superceded later by the double circle datestamps of 1900-1902 that incorporated most if not all the features that the post office required, such as the full time shown as am or pm, a design that was not subject to wear – a circle is obviously the best and a double circle even better.

There are no exact records as to when in 1898 this datestamp was first used but from records in this study it appears to be August 1898.

The design consists of an outer circle with a diameter of 39 mm and two semi-circular lines, separated by the date and time control. The words “G.P.O. Cape Town” appear at the top, and “Cape Colony” at the bottom of the handstamp (DDS 1 to 3). Two variant types may be distinguished. The first (DDS 2) has the semi-circular lines connected by baselines to form two segments, while the other (DDS 3) shows the baseline only partially extended. When observing these designs Goldblatt notes that …”the immediate reaction is to attribute these baseline deficiencies to wear, but from many examples seen the variants seem to be constant”. I am in agreement with Goldblatt that from the examples of all three can be observed. However, I am not certain that all three datestamps were different designs. It can be observed from the examples shown in this page, which were during the first month of operation of this datestamp, the first issue was that of DDS 2, incorporating full lines into the design.

It is possible that as the datestamp worn out – especially given the fact that during the Anglo-Boer war there was an increase in correspondence – the datestamp was filed out to make the insertion of the time and date control easier.

It’s usage was terminated late 1901 or early 1902 superseded by the Double Circle Datestamp.