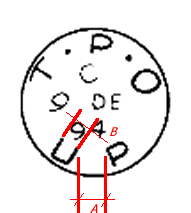 The first T.P.O to operate was started in 1882 and originally operated between Cape Town and Beaufort West. This was later extended to Victoria West Road (later named Hutchinson) and subsequently to De Aar and beyond. These first marks had no special identification marks and they were simply denoted ‘T.P.O. UP’, ‘T.P.O.DOWN’ , ‘TRAVELLING PO UP’ or ‘TRAVELLING PO DOWN’. These marks can be found used up to 1896.

To identify these marks properly both the illustration and the description should be consulted.

In about 1891 the TPO between Cape Town and De Aar was renamed ‘Western TPO’, reflecting its route of operation on the Western Section of the CGR. Well after the new name has been adopted, the use of ‘No Name’ continued until at least May 1896 (Hagen and Naylor). The service may have operated also on the route De Aar Naauwpoort and after the rail bridge over the Orange River was opened in 1890, as far north as Norvalspont.

Based on this identification method Hagen & Naylor identified thirteen postmarks as described in the following table.