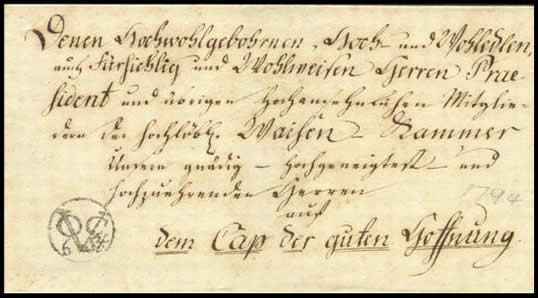 The first postal marking associated with the Cape is the VOC handstamp. It consists of a circle containing the monogram Vereenigde (Nederlandsche Geoctroyeerde) Oos-Indische Companie – the United Netherlands Chartered East India Company.

Covers addressed to the Cape of Good Hope and stamped with the VOC handstamp are scarce. The collector should be careful as forgeries are known. These covers are best bought with a certificate.

These covers are more scarce than those stamped with only one VOC handstamp.

Covers with three strikes (18 stuiver rate) are even scarcer and must be considered of the utmost rarity. One such cover is shown on this page by kind permission.

Only one cover with a VOC 2 guilder handstamp addressed to the Cape of Good Hope has been reported in the literature.(See image below). This was received in the Cape on 16 January 1793.

Was the VOC handstamp a Cape of Good Hope handstamp?

To my knowledge all known covers are addressed to the Cape of Good Hope and at best the VOC was an arrival stamp. However, I share Goldblatt’s view that it is highly unlikely that so many different arrivals stamps would have been issued to the Cape, especially given the fact that these early mails were limited in number.

VOC handstamps are normally classified based on the angle from the vertical of the Number 6 (as per Goldblatt). This is still an area where further research can lit some light. (See VOC handstamp classification and examples below).