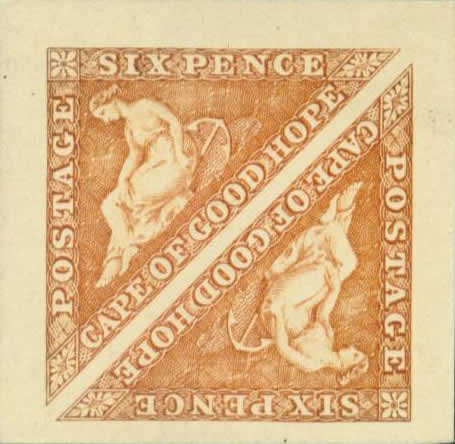 Die proofs of 6d. and 1s. are known printed in different colours that the set issued.

There is a rare set of ten Six Pence and ten One Shilling proofs which originally belonged to the 26th Earl of Crawford who died in 1913. The Earl of Crawford has been one of the most distinguished philatelists of the last century. A letter in his handwriting states that only three sets of these were made.

This is also confirmed by a letter from Perkins Bacon. He refers to them as trials. They seem to have been in the Smuts collection at one time C.J Philips wrote of them as “the exceedingly rare pairs of proofs…all in fine pairs”.

The pair shown here found its way in Dale Liechtenstein’s collection and eventually in mine. It is impossible that these Crawford proofs could be anything else than colour trials made before printing the stamps in 1857. The 6d. prints are a shallow print and the 1s. pairs are deep.