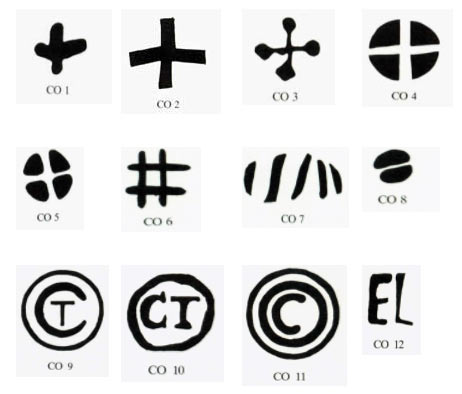 Postmasters were required to use the ordinary letterstamps for defacing postage stamps on parcels. Damage often resulted as the hard face of the datestamp cut through the paper wrapping and to prevent this, postmasters and postal agents made their own personal dumb obliterators. Using cork or wood, they cut shapes and designs into the material. Such Cork obliterators (CO 1 to CO 13) were in use towards the turn of the last century and a large variety of them are noted. The use of these dumb obliterators was not authorised by the postmaster general, but as they served the purpose so well officialdom not only turned a blind eye but also would appear to have actually encouraged their use.

Simplicity of design was the keynote and most of the dumb cancellers are roughly cruciform, the cross being either in relief or sunken. Other commonly found designs include a series of bars, circles or squares.

t is hard to trace the origin of cork cancellations unless they are found on piece accompanied by a datestamp. However, some are readily identifiable showing the initial of the town of origin. Thus there are “C” or “CT” for Cape Town, “EL” for East London, “P” for Paarl, “B” for Bedford and “HV” for Hanover. A circular or square frame sometimes encloses initials.

Many types are known and the illustrations and the study that follows here are by no means exhaustive.Stamps on covers are known to have been defaced with these Cork Obliterators, although this was unauthorised.

Only a few covers of this nature have been noted and they are rare.