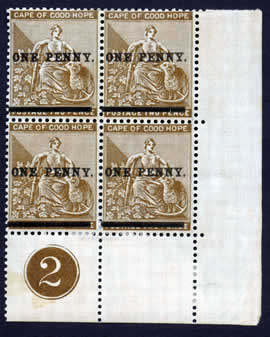 In March 1893 there were placed on sale the last of the provisional stamps issued by the Cape Colony, being the Two Pence value of the Cabled Anchor series overprint locally,-” ONE PENNY ” the value obliterated by a bar. New die in 1893, but delay of the first shipment, to supplement the Treasury stocks of that value by the local conversion of 10,000 sheets of the Two Pence stamps into the lower value.

The surcharging was carried out by Messrs. W. H. Richards & Son in Capetown who in those days were the Government printers, in succession to Messrs. Saul Solomon & Co.

The full sheet of 240 stamps was surcharged at each operation of the printing machine.

There are several minor varieties in connection with this surcharge which are described below, and it is necessary to note that the bar of the surcharge canceling the words ” two pence ” was set up separately in respect of each stamp upon the sheet, not in a continuous line.

Shades of the bistre-brown of the Two Pence stamps are to be found with the ” one penny ” surcharge.

Rectangular design of ” Hope ” sealed, with thin outer line of colour removed. Two pence bistre-brown. Water­marked Cabled Anchor. Surcharged by Messrs. W. A. Richards & Son, of Capetown, with the words ” one penny ” in black, and with the original value, obliterated by a black bar.
“one penny” on 2d. Issued March 1893.