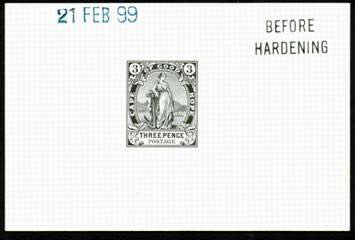 The introduction of the first stamps of the new design, which had been decided upon, was effected in October 1893 with the One Penny value making its appearance. ” Hope ” still continued to be the dominating feature, but having by this time remained seated for upwards of forty years, she now assumes a standing position, reclining with her right arm against an upright anchor.

The background consists of a view of Table Bay, with a steamer appearing on the right, and with Table Mountain in the distance, and is enclosed in a decorative frame containing the words ” Cape of Good Hope ” in un-coloured capital letters of ornamental character. A white tablet at the foot is utilised to denote the value expressed in words, whilst underneath appears the word ” postage,” the former being in small block capitals and the latter in small ornamental letters. Plain white circles fill the two top corners and contain numerals of the value, and a thin line of colour surrounds and completes the design, the original drawing for which was made by Mr. Mountford, of Capetown.

Messrs. De La Rue & Co. prepared the new die and printing plate, and, from time to time, manufactured large quantities of the stamps upon the Anchor paper, and the numerous printings which took place resulted in the production of many distinct shades of both rose-red and carmine.

When, early in 1895, the decision was reached to effect a change

in the general design of the Cape stamps, it was the intention of the authorities that as the printing plates of the old pattern became useless for further work, they should be replaced by plates made from the new ” Hope” standing die, until the alteration had been effected in respect of each value.

Steps in this direction were accordingly taken. When it was reported in 1898 that the Halfpenny plate of the old type was no longer serviceable and required to be renewed, and in October of that year Halfpenny stamps of the new design came into use, printed by Messrs. De La Rue & Co., in green. Many shades of this colour exist. Plate proofs as well as essays exist.

Early in March 1902 a further stamp of the ” Hope ” standing pattern was placed on sale in the Cape of Good Hope Colony. This was the Three Pence value which, in view of the subsequent adoption of the King Edward Designwas the last of the ‘Hope’ stamps. The ‘Standing Hope’ or ‘Sitting Hope’ has served the Cape of Good Hope for many years.

The Edward VII designs, proved to be the last of its type with the Cape of Good Hope incorporated into the Union of South Africa as the Cape Province.

The above stamp is known imperf., and exists in imperf. pairs. In this condition it is from a plate-proof or trial sheet.