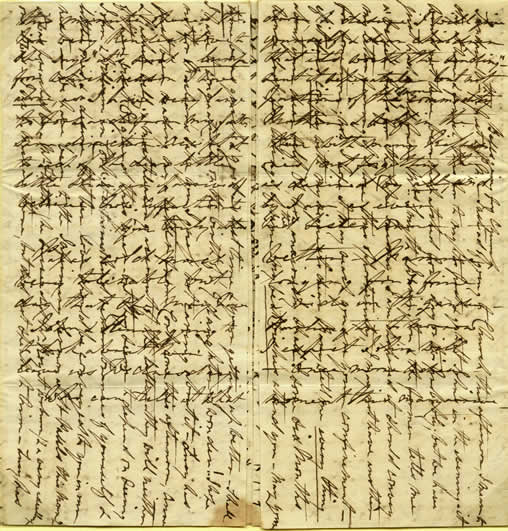 Palimpsest Letters were the result of the high cost of postage and form an interesting part of any Cape of Good Hope Postal history collection. The writer wrote first horizontally, then turned the page through 90 degrees and continued vertically. This way a single page instead of two could be sent, with considerable savings in postage, as the single rate postal rate applied in this case. In the example below letter is perfectly legible.

The Ship Letter Act of 1815 (55 Geo. III C, 153), passed on 15 July 1815, was termed by some ‘an act of preventing the correspondence of parents and their children in the Cape and the East Indies’. The rate of postage for a single packet letter was tripled to 3s. 6d. and a double letter was charged at 7s. This was an enormous amount of money in those days.

To counter this considerable escalation of postage rates, sometimes letters sent from the Cape of Good Hope or from Eagland to the Cape of Good Hope were written in a criss-cross fashion. This is sometimes termed – incorrectly in my opinion – as ‘palimpsest’ form. That is writing first horizontally and the vertically – and sometimes even diagonally-across a single sheet of paper, thus condensing a letter of two or three pages to a single one.

The act of 1815 dealt specifically with sea postage to and from India, Mauritius and the cape of Good Hope. This brought into service H.M. ships of war and other vessels such as packet boats. In effect some of the vessels of the East India Company became ‘post office packets’. The East India Company was satisfied, as the act provided good payment for the letters carried in the Company’s vessels. The post office, meanwhile, geatly benefited from the substantailly increased revenue.

The sea voyage from Eagland to Cape Town at this time averaged about 70 days. The appointment of the post office packet slowed postal services and the duration became closer to four months.

The Ship Letter Act after long protestations was repealed in 1819. While in operation all letters carried by packet boats had to have an official post office handstamp. During 1816 a dated Packet Letter stamp (PL 1) was issued to the post office at cape Town. The earliest known date is 3 may 1816.

Palimsest is defined in various dictionaries as a manuscript, typically of papyrus or parchment, that has been written on more than once, with the earlier writing incompletely erased and often legible. In philatelic circles it has gained the meaning attributed to letters written in a criss-cross fashion. However, to be fair to philatelists these early parchments after being erased (never completely) were then written at ninety degrees to make the writing more eligible.