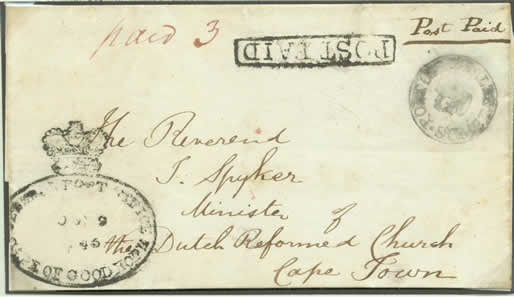 No official post offices were established in the country districts before 1816. The residence of every district’s laddrost served the purpose. The landdrost effectively undertaking the duty of post-master.

By 1816, post offices in addition to the long-established one in Cape Town, had been created in Stellenbosch, Simonstown, and Uitenhage. On October 4 of that year, further offices were opened at Paarl, Tulbagh, Caledon, Swellendam, George and Graaf-Reinet. In all instances these country post offices were housed in the local Drostdy – the residence of the local magistrate. Each office was issued, a period of time with a distinctive, handstamp named ‘Crowned Circle’ handstamp. These handstamps had been manufactured in England by R. Scott (seal engraver of the Strand, London) and each handstamp’s Crown (eventually 19 in total) differed slightly from its counterparts.

These handstamps were used to indicate that postage had been prepaid or that the letter in question was entitled – as a recognised official letter – to exemption from postage. Postal regulations required that the dispatching office should impress its stamp in the upper right-hand corner of the letter and the receiving office act similarly but in the lower left-hand corner. Earlier covers often bear only the mark of the office of dispatch. These markings are often indistinct the main reason being that the stamps were also used to seal wax seals and thus were clogged easily. (See wax seal illustrations with crown in circle impressions).