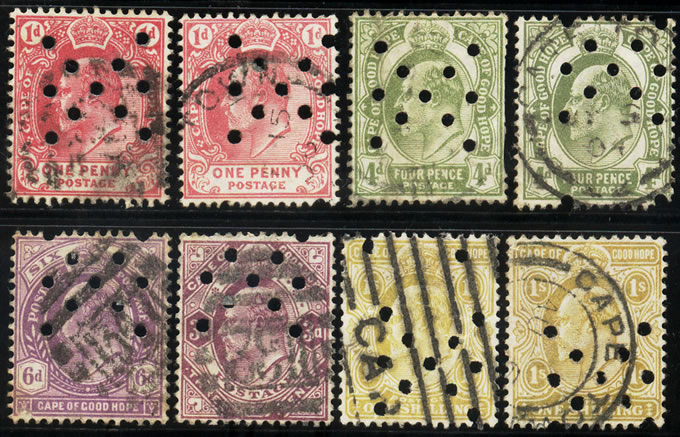 The relationship of the Cape Colony to the Mother Country was for the first time indicated upon what proved to be the last issue of Cape of Good Hope postage stamps, namely, those which appeared at intervals from 1902 to 1904, bearing as the centre-piece the profile portrait of His Majesty King Edward VII The design is said to have been adapted from the same die as that employed in the preparation of the plates from which the King Edward stamps of Great Britain were prepared.

“Hope,” having risen from her seat after a period of contemplation lasting for upwards of four decades, having stood, at intervals, upon the One Penny, Halfpenny and Three Pence values, for seven years, and having finally appeared above the clouds on the One Penny stamp of 1900, now entirely disappears.

The new stamps of the Cape of Good Hope, of nine denominations, from Half-penny to Five Shillings, were printed by Messrs. De La Rue & Co. who also prepared the dies and plates. All values were printed upon the usual paper with the cabled anchor watermark normally used for Cape of Good Hope stamps.

The central portrait of King Edward VII is the same throughout. Unlike other colonial stamps each value has its own distinctive frame of an ornamental pattern. In this frame the words ‘Cape of Good Hope, postage,” and the value are incorporated.

Several printings were made resulting in a variety of colour shades in all values.
For the One Penny stamps four different plates were needed, whilst three plates sufficed to provide the necessary supplies of the Half­penny value. In all other cases one plate only was employed.

In certain of the sheets of the One Penny stamps the horizontal lines of shading in the medallion containing the King’s portrait to the right of the head, are almost entirely absent This is probably owing to the plate being worn, or to uneven inking. Another whilst minor variety exists in the same value where a small spot of colour resembling a full stop occurs between the letters ” о” and “n” of ” one.”

Other values appeared from time to time up to October 1904, when the series was completed by the issue of the Two Pence value.

Considerable stocks of the stamps of old designs were still on hand in Capetown, and during certain periods the King’s Head types were withdrawn to admit of the old stocks being used up, whilst at other times, the old and the new stamps were in concurrent use.

In 1perfin906 the Cape Government Printing and Stationery Department adopted a system of perforating in connection with the stamps used by their Department upon their Foreign Mail matter. The stamps so used were first passed through a machine and a device, consisting of eleven round holes, in the form of two triangles, having their common apexes meeting in the hole at the centre of the stamp, was punched out, thus:

Definite information as to all the denominations of the stamps so treated is not available, but the following have been seen : One Penny, Two Pence, Three Pence, Four Pence, Six Pence, One Shilling and Five Shillings.

Other values of the King Edward stamps may be found with various forms of overprint for revenue purposes, and were employed in the collection of cigarette and customs duties. Although these frequently bear postal oblitera­tions, they were never used for postal purposes, and have no real philatelic interest.

Stamps are found privately perforated normally with the Company initials to eliminate pilferage of stamps from the Company concerned.

New Issue of Postage Stamps. – Upon the accession of His Majesty to the Throne it was decided by the Government to introduce new designs of postage stamps, post cards, etc., being a representation of the head of the King. Instructions were
accordingly issued to Messrs. Thomas De la Rue and Sons, London, for the preparation of suitable designs, and these were in due course submitted and approved. They consist of oval centers, showing the head of His Majesty in profile (after an original drawing by Mr. Emil Fuchs,the sculptor), set in suitable frames. His Majesty having commanded that all stamps bearing his effigy should have an
Imperial crown in the border, this has been adopted, and the crown appears in the new issue immediately above the head, adding considerably to the appearance of the stamps. In the upper corners the values of the stamps are indicated in bold
figures; and in words at the base.

It was Messrs. De La Rue’s proposal to have the same frame for each denomination of adhesive stamp; but, in view of the resemblance between the colours of certain denominations, more particularly in artificial light, and that something more than a more colour difference is therefore needed to enable the several values to be readily distinguished under all circumstances, I recommended a different design of frame for each value, and this suggestion has been adopted. As the colours of the stamps are fixed by the Universal Postal Union Convention, it was not possible to make any alteration in that respect, nor could any such alteration have been entirely effective, but the adoption of the different frame for each variety will remove any likelihood of mistake in those cases where the colours approximate, and will distinctly facilitate the checking
of postage.

It was hoped that the new stamps would be ready for issue on the 1st January, 1902, but owing to the quantity of similar work for other Colonies which the contractors have in hand, and the great length of time which it was found would
be occupied in engraving in turn the various dies and formes, this has proved impossible. It is anticipated, however, that the new dies will be brought into use in connection with the execution of the next indents for supplies; in which case some of the denominations will be put into circulation towards the close of the year 1902 (1901, p. 29).