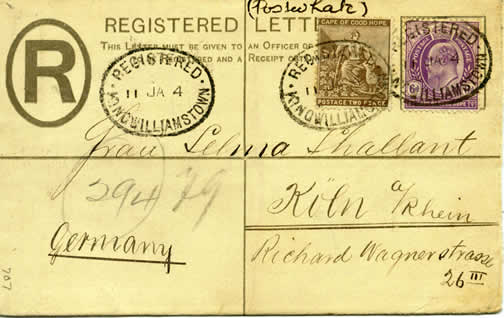 The Travelling Post Ofice service of the Cape of Good Hope comenced late 1882. Special vans were fitted to carry mail. In 1883 the line reached Victoria West but as the railway lines were extended so did the T.P.O.

In 1885 the service reached De Aar and the section from Cape Town to De Aaar was named the Western T.P.O.

The vans were coupled to trains which departed from Cape Town at 5.30 p.m. every day of the week except Fridays and Saturdays. An express or “fast” train left Cape Town on Fridays at 1.15 p.m. Four of the vans proceeded as far as Beaufort west and the other two continued to De Aar.

The Western T.P.O. continued to use the no-name postmarks until about 1891, the “No Name” T.P.O. was renamed the “WESTERN T.P.O.” as it operated over the Western route of the Cape Government railways between Cape Town and De Aar. It carried on well into the twentieth century (until 1950) when T.P.O. were stopped because of expense. The Western T.P.O. operated North of De Aar at times and also on the route De Aar to Naauwpoort and possibly into the Orange Free State on occasion. “UP” in the marks indicated towards Cape Town and “DOWN” away from Cape Town. In the course of the train’s northbound journey from Cape Town, letters, newspapers and parcels were dispatched to all offices in the colony, as well as the Orange Free State and Transvaal. On the return journey, the main duty of the official in charge was to open every mailbag addressed to forward post offices and to sort the correspondence to facilitate speedy delivery on arrival at the terminus.

Mai lbags were made up and handed out at stations en route and mail for Cape Town was sub-sorted into various categories such as government departments, private boxes, poste restante and street deliveries. Foreign mail was sub-sorted for transmission to London, Manchester, Plymouth, Liverpool, Scotland, Ireland and provinces and countries to be served in London. This facilitated the dispatch of overseas mail on Wednesdays, which was accomplished within three hours of the train’s arrival at Cape Town.

Posting of Letters on the Train

The T.P.O vans carried a supply of postage stamps which the public could purchase and mail could be posted on the T.P.O. up to the time of the train’s departure, or at any intermediate station. This was, subject to the payment of 6d. as a late fee over and above the normal rate if the mail bags had already been closed. This was denoted by a Late Fee handstamp (TPO 25). Letters posted on the train are rare although a number of them exist and quite possibly more are waiting to be found in postcard collections.

A registered service was available on the Western T.P.O vans. this registration service was identical to those offered in other post offices of the Cape of Good Hope.