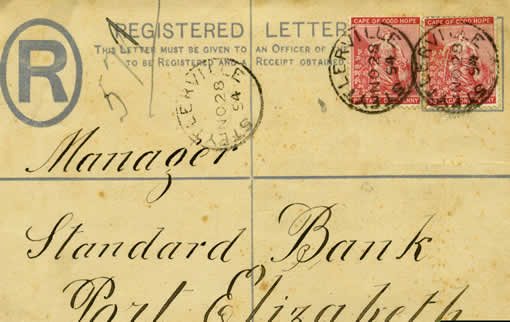 By the year 1894, T.P.O. services were operating on the following six routes: Cape Town to De Aar, De Aar to Port Elizabeth, Zwartkops to Uitenhage, Middleburg Road (Rosemead) to Stormberg Junction, Naauwpoort to Norval’s Pont and Norval’s Pont to Johannesburg.

To avoid delay of postal matters to and from places served by the Graaf-Reinet branch of the railway, a T.P.O. service was established between Zwartkops Junction and Uitenhage in 1893. The service was withdrawn in 1897 for financial reasons. The service used only one type of postmark.

Probably because of the short period of operation Goldbaltt records only a single example of this postmark. Hagen and Naylor record as having seen only one copy, which is the one illustrated here.

However, the date he records is October 2 1895, whereas the copy in my collection illustrated here is dated earlier. Probably two or three copies exist. Nevertheless the ‘Zwartkops Sorting tender’ postmark is one of the most scarce postmarks of the Postal History of the Cape of Good Hope or at least I consider it so.

This postmark is a single circle of diameter 22 mm and with a dot at the bottom. The wording is “Zwartkops Sorting Tender” and is so spread as to occupy the whole of the perimeter of the circle. This mark (Goldblatt TPO 26 and H&N 6) is dated in two lines.